The Hewlett-Packard HP-75 series of portable handheld computers were a miniaturized version of the HP-85 computer architecture. The HP-75 had a single-line 32-character LCD, 16kB of RAM (plus an optional HP 82700A 8kB expansion pack for 24kB total), 48kB of ROM, three slots for add-on ROM modules, an HP-IL interface, and a manually-operated magnetic card reader and writer (1300 bytes per card). The HP-75D model added an additional port for a barcode reader wand.

The HP-75 runs BASIC and has additional functionality, such as a time and date display, text editor, ability to set appointment reminders (with alarms), etc.

The HP-IL ports on the computer can be used to connect to various devices, such as:

To power on, press the ATTN button. To power off, press SHIFT+ATTN.

Add-on ROM modules are installed on the side facing the user.

8V AC power connector on the left, and HP-IL in/out on the right. 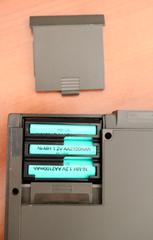 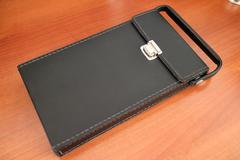 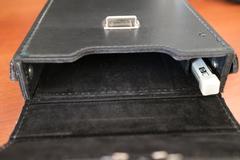 Slot on the right is for storing a tube with magnetic cards.

These have two sides and store 650 bytes per side. The clocking information is pre-written onto the card, so it's unfortunately not easily possible to make new cards out of similar magnetic material, as the HP-75 isn't capable of low-level formatting them.

The rightmost of the HP-75's ROM slots is taken by the pod's interface cable, but the other two remain available.

The HP-75D has an additional barcode wand port and the pod adds two RJ11C jacks for the modem functionality (one connects to the phone line, and the other can be used as a pass-through port for the telephone). 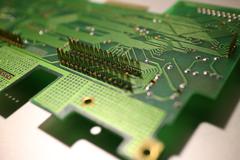 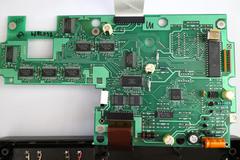 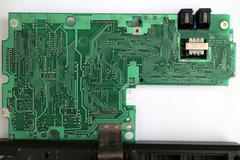 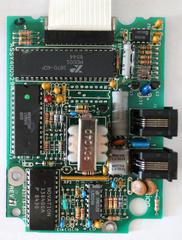