The Hewlett-Packard 82162A thermal printer is an HP-IL printer.

It was originally designed to be used with HP-41 calculators, but later HP-IL capable computers, such as the HP-75 and HP-71 can also use it.

Note that this unit needs a working battery pack to function, even if you connect it to power. If the battery pack is dead or missing, the paper won't advance, since the power supply alone can't provide enough power to drive the motor.

A common failure is that the rubber belt inside the unit loses elasticity, because the rubber starts to disintegrate due to old age. This is easily fixed by replacing the belt with a new one — the belt is round, its inner diameter is 19mm and its thickness is 1.5mm.

Another common problem is that the lubricant on the two shafts inside dries out, preventing the paper from advancing or the head from moving. To fix this, first clean the dried lubricant and dirt off both shafts using isopropyl alcohol (IPA) and a cotton swab, then apply silicone lubricant (or a tiny drop of fine machine oil) to both shafts. Make sure you move the head from one side to the other a few times (by spinning the wheel on the side), so the lubricant will get evenly distributed. Don't put too much lubricant on it, as it will only accumulate dust and you'll need to service it again after a while. Don't use WD-40, as it is not a lubricant and will cause serious issues when it dries out. 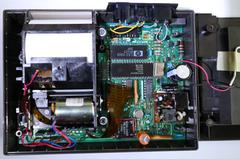 Close-up of the motor and the two shafts