The Silicon Graphics Indy is a graphics workstation from 1993 that packs a lot of features in a small "pizza-box" form-factor that was popular at the time. The Indy is the lower-end successor to the Indigo workstation (the higher-end successor was Indigo2) and has built-in video capture hardware — it also shipped with an IndyCam, a webcam-like camera that was intended for video conferencing. The Indy was succeeded by the O2 workstation in 1996.

The available Indy configurations differ only by the installed processor and graphics options, the motherboard and chassis are the same across the entire product line.

There was a variant of the Indy called Challenge S, which was basically an Indy without graphics and any audio/video I/O. It's not possible to convert a Challenge S into an Indy, as its motherboard is missing a lot of components.

The PROM can be upgraded to a newer version only by using an external EPROM programmer, since it's stored in an older UV-erasable EPROM chip.

The Indy motherboard has 8 sockets for industry-standard 72-pin FPM (fast page mode) SIMMs with parity. Use 60ns or 70ns SIMMs (60ns is faster).

The maximum configuration is 256MB (eight 32MB sticks) and the minimum is 32MB (eight 4MB sticks). Sticks must always be installed in groups of four equal sticks.

Indy has two different families of graphics options that attach to its GIO32bis bus: Newport (XL) and Express (XZ). Both implement OpenGL 1.0 (plus SGI extensions).

The Express (XZ) graphics come in only one form: a two-board set (part number 030-8234-00x + 030-8235-00x). The advantage over the XL boards is that XZ does geometry calculations in hardware instead of on the main CPU. However, in an R5000 Indy, the CPU is faster than the geometry engine on the XZ graphics, so the XL boards are preferable in this case (unless you also need depth-buffering [e.g. when doing 3D CAD], in which case the XZ board takes the lead again). No dual-head option is available for XZ graphics, most likely because of physical constraints (i.e. size of the boards and their heat dissipation).

None of the graphics options on the Indy support hardware texturing.

The Indy comes with quite a few built-in multimedia I/O ports:

Apart from the built-in options above, the following two GIO video cards were available:

Close-up of the logo 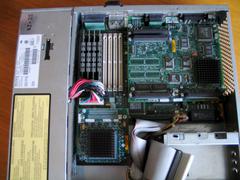 Inside of the Indy 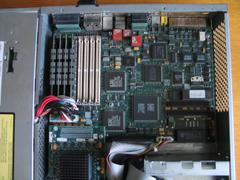 Inside of the Indy with graphics board removed 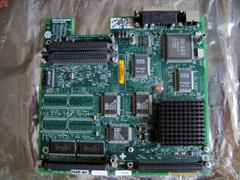 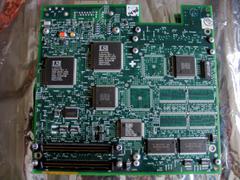 8-bit Newport XL graphics board (back)